I was tagged by David Dalka to write 8 Random Things About Me from Paul Ruppert’s original meme. I’m fairly sure that there are people who know these things already (because I talk a lot, so there’s a real good chance I’ve blathered about at least one of these things to someone someplace…) but anyway, let’s get on with it, shall we?

1. I was a band geek. I’m sure that surprises no one, actually. I played the cello in third grade, but switched from orchestra to band (with the kewl kids) in fourth grade. Because I like to be number one, and there’s really zero competition for first chair when you play an instrument no one else in the universe plays, I played the oboe. (I can feel whatever cool points I might have had just draining away right now….) In high school, because you can’t march with a double reeded instrument, I played mallet percussion in the marching band… what does that mean? That means I stood on the sidelines and played the xylophone. <channel Glenn_Quagmire>Oh yeah</channel>.

2. I drive a Jetta that has 135,000 miles on it. It’s navy blue (to match my clothes, because when I got the car 8 of the 9 suits I owned were navy blue), and I used to recreationally yell “Fahrvergnugen!” whilst driving because I love my car so much and because it’s just such a fun word to say. 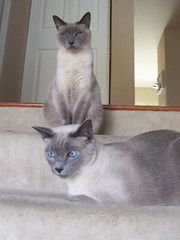 3. I have two blue point Siamese cats that I got from the Siamese Rescue. Their names are Jack and Lola (those are the names they came with) and they’re littermates. The adoption process was incredibly lengthy (essay questions, references from friends, neighbors, vets, employment verification, etc… seriously, it should be so hard to have a human baby), but despite the approval process, we’re very happy we got the moo-cats because them is super kewt and we wuv them lots (which is actually how I talk to them… because they only understand babytalk, you know).

The year before we adopted Jack and Lola, I had gotten my daughter a kitten from a regular pet store for Christmas, and unbeknownst to us, the kitten had picked up Feline Infectious Peritonitus from one of the other cats (terminal, incurable). FIP is an unpleasant way to go, and poor Cinnamon was so tiny to begin with, she had left us by Easter. My daughter, who was 5 at the time, was devastated. When it was time to find a new kitten, I decided to go through a rescue because they seem to be more vigilant about screening the cats for illnesses and really care about matching the cats with the new families. They matched us with Jack and Lola, and we drove 6 hours each way to pick them up from the cat transporter people who had brought them up from Kansas.

Oh, also related to the whole Christmas Cat Gone Bad incident… Less than a year after we got the meezers, Lola ate a ponytail holder and it tore a hole in her intestine and she almost died. Because it was an “ouchless” hair thingy, there was no metal on it, and the vet couldn’t tell from the xray what was wrong with her… all we knew was that she couldn’t eat anything and was down to 5 pounds (from her normal close to 12). The vet advised me to just put her down because exploratory surgery is expensive, etc. and there was no guarantee she’d survive, but because Gretchen was still shaken up over losing her last cat, there was no way I could have her new cat whacked just because WE left a ponytail holder out where she could get it. After 2 surgeries, a 2 inch section of resected intestine and $3,000 later (which at the time I didn’t have so I borrowed some from my mom and put the rest on my credit card), Lola is still with us and healthy and happy and tipping the scales at 13 pounds.

4. Other than a 2 week trip to Vancouver for business (during which time I did not see the outside of the hotel or conference center), I have not been outside of the US and I don’t have a passport.

5. I have a baseball card collection. Mostly Upper Deck though, because they’re prettier than the other brands. I have a Ricky Henderson rookie card in a block of lucite (1980, Topps) because I’m sure it might be worth something some day… and I have an obscene quantity of Mark Grace cards, posters and autographs because I had a HUGE crush on him when I was in junior high. Oh, I also have a ticket stub autographed by Harry Caray from the day my friend Jaime and I skipped school to go downtown to see the Cubs play… the only problem was that we sat 4 rows behind homeplate (so that every time the batter was on TV you could see us sitting there in our varsity jackets with our names on them… d’oh!).

6. I refer to my children as “the boy” and “the girl”… why? I have no clue. I just do and other people seem to think it’s funny.

7. I compulsively correct people’s spelling in IRC…. why? Because I suspect I’m a tad OCD.

8. I like scarves and hats. I like scarves a lot, actually. I have pashminas out the wazoo, and a big blackwatch plaid scarf thingy I wear when I’m chilly around the office (which is pretty much all the time for some reason). My old boss used to call it my poncho, and therefore called me “Pancho Villa”…. much to my chagrin.

4 thoughts on “8 Random Things About Me”